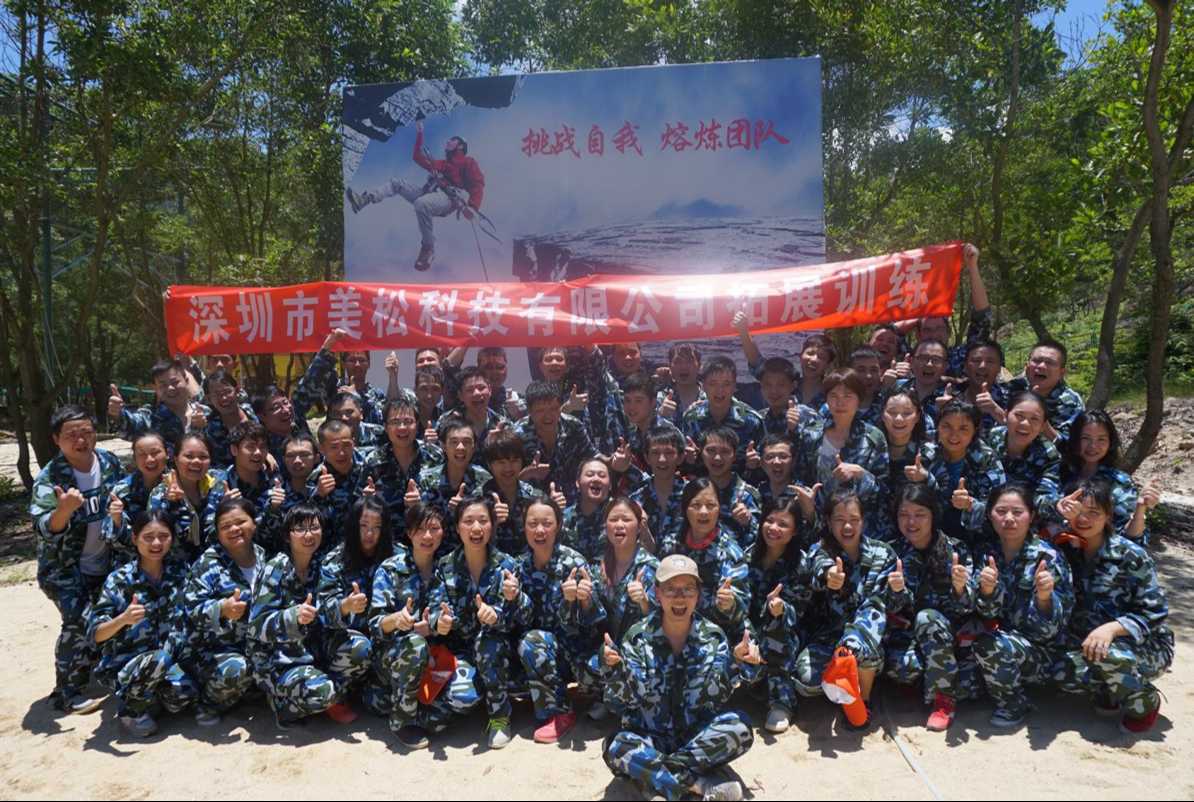 "Extension training" is a large-scale outdoor development activity. In the editor's opinion, it has also been endowed with the deep connotation of "honing the will, cultivating sentiment, perfecting oneself, and melting the team". In MASUNG, many new employees may have only heard about the "outreach training" activity, but did not personally participate in it, so they don't know what the so-called "outreach" is. Before the outreach activities, all the trainees actively responded to the call of the team leader, giving their team names and designing team calls in advance. This expansion is divided into six teams. Before the expansion, the teams have already started PK without war. First, let's look at the team names and team names of the teams: 1 The team name is the wind and rain team, and the team is invincible. ; The team name of the 2nd team is the Flying Tigers, the team call is the hot wind, the drums are fighting, who will the flying tigers be afraid of; the team name of the 3rd team is the extraordinary team, the team’s call is extraordinary willed, surpassing themselves; the 4 team The name is the elite team, and the team's call is to strive for excellence and one heart; the name of the 5 team is the Wolves, the team is called the Wolves to attack, and the team is invincible; the name of the 6 team is the outstanding team, and the team is to pursue excellence and create brilliant. Always strive for the first!

On June 25, 2016, the elite cadres of Shenzhen MASUNG Technology Co., Ltd. came to the Nanao base to participate in the outreach training training activities. The outreach training of the MASUNG technology backbone elites was opened in the opening ceremony of the general manager Mr. Chen Bin. prelude. When we quickly changed our clothes and entered the training ground within 8 minutes under the command of Coach Cui, we have been given a new transformation in our life! Because it inspires people's fighting spirit, stimulates people's potential and creativity The play of people's team ability.

The first day of card flipping and joint advancement and retreat projects test the team's ability to formulate plans and implement them; team PK, you compete, everyone will do their best for their team;

In the high-altitude grab project, we marveled at the speed at which Vice President Liao completed the accumulation and release of his own potential in 11 seconds and hit the target rod directly;

We are excited by Zhang Qianxiu's second jump beyond self;

We are moved by Chen Qiusi's first step bravely.

As the evening falls, the first day of intense and orderly development training has come to an end. All the soldiers of MASUNG Technology came to the beautiful shipwreck with excitement, enjoying the beach while waving on the oven, turning on. Food mode tonight. With beautiful singing on the stage, the birthday stars in June made their best wishes with the blessings of everyone!

At 8 o’clock the next day, the MASUNG colleagues came to the "Rose Coast" to start a new day. The graduation wall project deeply touched the softest part of each of us, leaving us with more It is moving and feeling. The specified time is 60 minutes to climb a high wall. No external force or tools are allowed. You must go up the front of the wall. Everyone steps on the shoulders of others and climbs over a high wall, letting the wind blow and rain. . Being able to act as a human ladder, take the initiative to get down and build a human ladder for others. During the entire climbing process, no one can make any sound. We affected the rules of the game because one of them was struggling to make a sound. All colleagues were punished and climbed again. Individuals gritted their teeth, at this moment, regardless of gender, no complaints, only one team. When the last member, Liu Dishui, grasped the foot of the penultimate person Huang Youbing with both hands, and finally climbed over the graduation wall with the help of his personal arm strength, everyone cheered, ah! We succeeded, and colleagues hugged each other. . .

At the moment when the originally selfish team leader volunteered to raise her hand to the coach and recommended herself as the commander-in-chief, she selfishly thought that as a commander, she could not have to climb the four or five meters high graduation wall. At this moment, more Is ashamed. Seeing the bruises left on the shoulders of Mr. Chen from the beginning to the end when the main ladder carried each colleague on his shoulders, Director Zhou stayed on his arms from the first climb to the wall to the lifting of all 58 colleagues. Huang Youbing, the last colleague of Huang Youbing, who was the last colleague who was working as a rope, had blood-stained scars, and there were many unnamed colleagues who gritted their teeth and endured pain. Female player Liao Lujiao Quietly kneel down on one knee while the deputy ladder silently supports the dedication of the last team member. The editor, as the leader of the team, as the commander-in-chief, sat on the ground and cried with his arms, letting the tears run across his face. . . . . .

More than just touching, the strength given by this team, the cohesion of this team. The training of "Climbing the Graduation Wall for Survival" is a test of our will. The 4-meter-high straight stone wall without any tools, we work together and work together to conquer the "stone wall", but what makes us more unforgettable is as human beings. The members on the base of the ladder don’t know how much they’ve been trampled on their shoulders. What’s more admirable is to help the last team member successfully climb the graduation wall and win the final victory, so that the team spirit of helping each other gets the best. sublimation. In the end, the male and female colleagues formed two large circles, circled the commander-in-chief in the middle, and expressed the most sincere words of gratitude. When asked whether they have confidence in the future of MASUNG and the decision-making of the general manager, all colleagues Passionately came back in unison: Yes! Have! Have!

This expansion is a ladder for the growth of colleagues, and it will also be an unforgettable event in everyone's life. In the development, everyone can bear hardships and stand hard work, not afraid of hardship, not afraid of tiredness, strict rules, and outstanding performance. Through this training, colleagues have also strengthened their physique, tempered their will, exercised their anti-frustration qualities, cultivated the spirit of unity and cooperation, and enhanced the understanding and emotions between colleagues. I hope that such a good atmosphere and team cohesion can Continue to carry forward! I believe MASUNG believes in President Chen, and work hard for MASUNG's tomorrow. Come on!